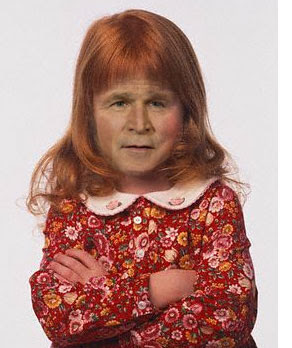 Read it and weep folks.
Ya know, even though Bush's ratings are in the toilet compared to 4 years ago, there remains a strong message out there amongst the chattering classes that Commander Codpiece is a "man's man". This continues to be a great problem in our Potemkin Nation.
Little Chrissy Mathews is quoted in the article,
MATTHEWS: We're proud of our president. Americans love having a guy as president, a guy who has a little swagger, who's physical, who's not a complicated guy like [former President Bill] Clinton or even like [former Democratic presidential candidates Michael] Dukakis or [Walter] Mondale, all those guys, [George] McGovern. They want a guy who's president. Women like a guy who's president. Check it out. The women like this war. I think we like having a hero as our president. It's simple. We're not like the Brits. We don't want an indoor prime minister type, or the Danes or the Dutch or the Italians, or a [Russian Federation President Vladimir] Putin. Can you imagine Putin getting elected here? We want a guy as president.
Oh, and just in case you're keeping score, Putin is a world class Judo expert who could no doubt kick the fratboy ass of Chimpy McBikeShorts.
Shucks. Why do I hate Amurka?...
Posted by Cleveland Bob at 9:16 AM