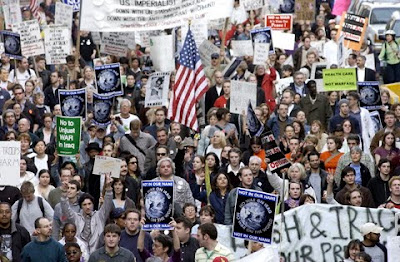 It was eight years ago this weekend that the United States began its illegal and immoral invasion and occupation of the sovereign nation of Iraq.

The traditional gift for an 8 year run is Bronze which I find uniquely appropriate considering that the Bronze Age was a time of great development for tools of war. And seeing that we're now officially the new Roman Empire of current times, we're right on track to implode in the next 20 years of so.

What was particularly compelling about this weekend was two-fold.

First, my favourite Congressional Rep., the honourable Dennis Kucinich, came out strongly against the sorties which are at this very moment flying into Libya.

Secondly, the appearance of bona fide war criminal, Paul Wolfowitz, supporting this saber rattling on today's This Week with Christiane Amanpour further convinced me that this foolhardy invasion of Libya is a HUGE mistake. Don't get me wrong. I'm no fan of Khaddafi, but we just cannot afford to get mixed up in yet another failed military fiasco. Obama is dead wrong on this one.

I just don't know anymore. Maybe it's just me but it sure feels like the world is unraveling at a pace heretofore unseen in our contemporary age. Then again, I'm confident that everyone in the course of history has felt that way...and they didn't have even Faux News to confirm their worst fears. Swell.
Posted by Cleveland Bob at 2:03 PM