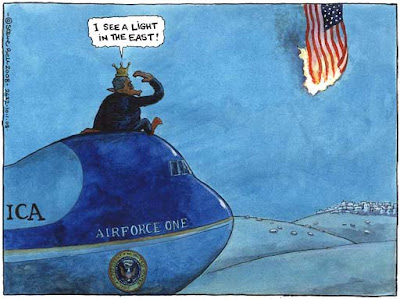 Steve Bell takes a gaze at the end of the Bushian empire.

For another gauge on the Israli reaction to the Chimp's visit to the Middle East look no further than the very well respected Ben Caspit, who was Netanyahu's biographer no less, to sense the anguish.

"It is a long time since the United States has had such a failing president, who caused so much damage to so many interests and values in such a short time. Think about the state in which he received America and how he is returning it. The power that dominated the world is now begging for favors...."

"The most severe thing about him is that until now, he has not managed to understand the magnitude of the stupidity of his moves. There is no one to tell him that despite the limousines, Air Force One, the Secret Service, the boots, the trappings of power, the CIA, the FBI and the other rituals and ceremonies surrounding the American president, despite all this—the president has no clothes".

If a regular goyim such as myself may be so bold...Oy vey!

Posted by Cleveland Bob at 8:11 AM