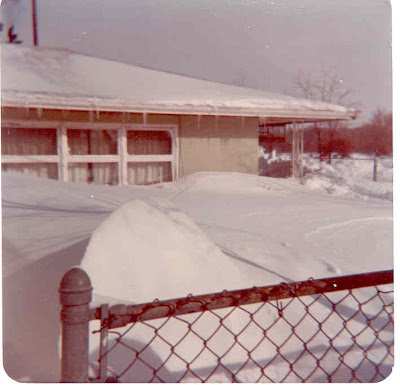 The traditional gift for a 30th anniversary is pearl.

No, no, the Blonde and I are still a few years short of that date. Mebbe I'll give her a pearl necklace later.

However, it is the 30th anniversary of the 1978 storm that crushed the states of Illinois, Indiana, Kentucky, Michigan, Ohio.

I was a freshman at Bowling Green State University. The storm blew in over night on a Wednesday real late. We awoke on Thursday morning to find found ourselves to be part of about 850 guys trapped in a huge dorm complex. We had heat, couldn't get out of the doors and the plumbing didn't work. It was both frightening and exhilarating.

Everybody laid low for a couple of days. I read Tom Wolfe's, The Electric Kool-Aid Acid Test about Kesey's scene and we could still get hot food at the cafeteria after we dug a tunnel. As I remember it, martial law was literally the rule of the day and there were a lot of National Guard dudes in big trucks patrolling the main streets in BG.

I was in a production of Sheridan's The Rivals (it's where the word "malaprop" comes from) with Paulie at the time and was awakened every morning around 7:00 a.m. by a call from Dr. M. telling me that the show had yet again been canceled for tonight's performance. Thanks, man.
I recall my roommate really appreciating the wake up call. Anywho, we got out a couple times through the weekend. Dave knew a guy who knew a guy with the padlock to a package goods store which had already been looted a bit. Ummmmmmmmmmm....Beer.

All in all not too bad a time particularly considering that I was thankfully not among the teams of guys who were deployed in Rodgers Quad to manually purge the toilets before the plumbing could be restored. Yeah.
Posted by Cleveland Bob at 10:54 AM